By the 1904-05 season which in hindsight could be said to be the last season in which the Bradford RFC could be classed as a leading club. Past glories as one of the countries leading club were fading fast. An aging side, an opposition to the new Northern Union rule to reduce numbers from 15 a side to 13, falling attendances and possibly above all, envious eyes being cast across the city towards Valley Parade where old rivals Manningham had earlier taken the step to convert to the Association code under the name of Bradford City AFC where attendances were more than treble those turning up at Park Avenue to watch an ambitious new club performing in a National competition could not be ignored.

In the eyes of the Park Avenue hierarchy, they had always been the towns club, the representatives holding all the prestige of past glories in the sporting world. The neighbours from Manningham had in recent years not only caught up with them but overtaken them on the rugby field. Now, their conversion to ‘Soccer’ had taken them into a new, exciting, growing phenomenon which in time would become the countries national sport. Huge sums of money had been spent bringing Park Avenue up to a standard becoming a leading club and it couldn’t be left behind. The power behind the throne at Park Avenue, A. Harry Briggs was watching events at Valley Parade and under the name of ‘amalgamation’ suggested the Bradford City club move up to Park Avenue.

He hadn’t considered the strength of opposition by dyed in the wool ‘Manninghamites’ who remembered the fierce rivalry and sometime bitter enmity between the two clubs . When the proposed ‘amalgamation’ was voted down, Briggs decided the only way forward was to form his own Association club at Park Avenue but even then, there were traditionalists who wanted a return to the old ‘Union’ rules as a way back to the old glories. The problem here lie with the intransigence of the Rugby Union who declared that whilst they would welcome Bradford back into the fold, it would need to be a new team as the existing players were ‘professionals’ and could not be allowed to revert to amateur status.

Things were coming to a head and a meeting was called where the options were laid out in front of a hostile crowd on April 15th 1907. They could either

The vote was taken to by around 80% to return to the ERU but this caused anger amongst the general membership who felt they hadn’t been consulted. The clubs solicitors also declared the result void and against club rules. Further talks with the powers at Valley Parade then took place but again, the opposition shown made this option also a non starter. Matters came to a head at a General meeting called on May 6th 1907 when a 3 to1 majority voted to change to the Association code and thereby cast out Rugby which had been played at Park Avenue since 1881. This meeting would go down in Bradford Rugby history circles as ‘The Great Betrayal’.

Within a couple of days, a provisional committee had been set up by ‘rugbyites’ fans and former players to try and salvage the sport in the City. Firstly a ground was needed that would be suitable for the standard required. A meeting on 24th May at the Mechanics Institute in Bradford invited all interested parties to attend. A site off Otley Road was discussed as a home and good news came from the Northern Union who placed a transfer  ban on Bradford’s players to other clubs in a bid to keep the prospective new club competitive. The new club didn’t have a single penny in the bank and asked for a gesture from the Park Avenue hierarchy for the now un-needed kit, balls, goalposts and other rugby paraphernalia which was duly given and was much welcomed saving in expenditure.

By June the new club had agreed a rent of £8 with Whitakers Brewery to use the Greenfield Athletic & Trotting arena at Dudley Hill. Their HQ was at the Greenfield Hotel and a substantial amount was spent levelling the ground and building new covered accommodation for up to 8000 fans.

Then, just when it seemed things were going well, several of the clubs senior players refused to throw in their lot with the new club. The 2 highest try scorers from the previous season Dechan & Dunbavin along with Captain, G. Marsden & Greenwood were the main absentees. In fact , Dunbavin elected to change codes altogether and stay at Park Avenue to lay the new with the new ‘Soccerites’. A call was sent out to the local NU clubs for players to try out to bolster the ranks alongside those who had chosen to stay. Club stalwarts like Mann, Gunn, Surman, Brear & Laidlaw would prove invaluable for the new club finding its feet after the early Summer turmoil.

September 7th 1907 saw the new club play its first game in front of a sparse crowd of 4000 at Greenfield against a Huddersfield club 5-8 and it wasn’t until 5 matches later that a home fixture would show a ‘W’ in the column beating a Hull side 11-5. 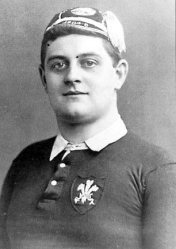 It was realised that there might in the publics eyes be an amount of confusion about the whole affair so it was announced on September 10th that the club would now be called Bradford Northern as a nod to the fact that it was the Northern Union code being followed. This was originally going to be a temporary measure until the club established itself but the name was never actually rescinded. There was also initial confusion due to the clubs new name and the fact they played in the south of the City!

By the end of October the club were languishing at the bottom of the table with no little amount of public glee being shown by former ‘Avenuites’ and other critics of the newly formed club. Several new players were signed and a number of ‘reserves’ were given their chance which saw the club eventually finish in a credible 12th place in their initial season. One low point had been a 50 point thrashing by Wigan, the first time any Bradford club had shipped so many points in one game. Highlights had included a trip to Wales against another fledgling NU club from Merthyr Tydfil, a wonderful 22-11 win away at rivals Leeds and to top the lot a superb 7-2 victory against the touring New Zealand side after a dour struggle .

A final record at Greenfield of 18 games, 12 victories and 6 defeats was an adequate return for the new club and fairly solid base to build on but at the clubs AGM, the Committee announced the club was once again on the move, this time to the West Bowling location of Birch Lane. Supporters were puzzled why the club were leaving a ground with only £8 annual rent, a strong Brewery sponsor and a considerable amount spent on the ground itself, for a location with very Spartan facilities and an annual rent of  £30.

The committee justified the move by saying the location was nearer the City centre, on a major Bus & Tram route and it had more potential to develop the area for the new, ambitious club. With the adjacent Cricket ground of Bowling Old Lane I wonder if memories of great days past at Park Avenue had coloured the thoughts of the committee men?

So after a fairly momentous season on and off the field, Bradford Northern Rugby League Club was born, Greenfield was left behind to become a Greyhound and Speedway stadium which lasted until the 1960s

The club moved to Birch Lane and never did return to the peak of the game until the move to the Odsal bowl and the glory days of the 1940s but those are other stories to be told. Bradford (Park Avenue) FC failed to be elected to the Football League and had to start, somewhat bizarrely in the Southern League before finally achieving League Football after one, long, travel weary season. The old die hard RU faction at Park Avenue were attracted to the Horton RU club which merged with Bradford Wanderers in 1919 to become Bradford RFC at Lidget Green. The new organisation enjoyed an era of glory during the 1920s where they had Several England trialists, a plethora of Yorkshire players, A superstar of the 1920s in Eddie Myers and a team who were amongst the best in the country once again playing regularly to 5 figure crowds.

You will find articles about a broad range of sports on VINCIT with new features published monthly. We welcome contributions about the sporting history of Bradford and are happy to feature any sport or club provided it has a Bradford heritage.

One thought on “The birth of Bradford Northern”