February 20th 2020 saw the passing of one Jimmy Wheeler, a former Manager of Bradford City in the late 60’s/early 70’s. Even with the passage of time, I think it would be fair to say that Jimmy wouldn’t be at the top of fans favourite Managers of the past but that would be very harsh on his record.

I started going to Valley Parade in the mid 60s with my Father but as he worked shifts, I wasn’t allowed to go every week until the 1967-68 season when friends Father would take both of us. This article will hopefully pay respect to Mr Wheeler for his efforts in what turned out to be quite an eventful tenure in charge. 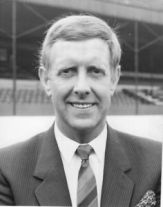 The eventful nature of things had actually started the previous season when the Manager, dual international Willie Watson resigned in January 1968 to take a job in Johannesburg. The team he had built were actually pushing for promotion, the goals of Paul Aimson, Bruce Bannister & Charlie Rackstraw keeping the side in touch. To try & keep the momentum, Chairman Stafford Heginbotham (pictured) gave the job to Watsons assistant, the former Leeds United stalwart Grenville Hair. A veteran of over 400 games at Elland Road, he was probably unlucky not to gain full international honours but he was in competition with the World Class Jimmy Armfield. He was popular with the City players and everything seemed to going to plan. Hair had decided to freshen up the team for the final push bringing in striker Bobby Ham from Bradford Park Avenue, winger Bruce Walker from Swindon Town & a double deal which sent Aimson & full back Alec Smith to Huddersfield Town in exchange for striker Tony Leighton & full back Denis Atkins.

The very next day after the double deal was completed, 7th March 1968, tragedy struck when during a training session, Grenville Hair collapsed and was pronounced dead before he reached hospital. He was 36 years old. For someone so young & super fit the death sent shockwaves through the club.

Due to the sheer shock and also out of respect, the club decided to wait before appointing a new Manager & skipper Tom Hallett & senior pro Jimmy McAnearney took over the running of the team. Despite losing only once in the last 11 games, the club was to fall just short of its goal finishing in a heartbreaking 5th place.

Jimmy Wheeler arrived in June 1968 for his first job in management after being the assistant to former England star Roy Bentley at Reading. Jimmy had spent his whole career at Reading playing over 400 games & scoring over 100 goals. He is regarded as a club legend & is in the Berkshire clubs Hall of Fame. A month later, utility player Ron Bayliss followed him from Reading as his first signing but he was told that the transfer policy must be one-in one-out to keep a control on the clubs finances. The previous seasons near miss meant that he started with a strong foundation to work with. A couple of fringe players were then sacrificed to bring in 2 players who would play a big part in the forthcoming season. Speedy forward Peter Middleton arrived from Sheffield Wednesday & Aussie keeper John Roberts arrived from Sydney club APIA to try his luck in the Football League.

The new campaign started off with a 5 match unbeaten run before the team hit an inconsistent patch with results as varied as a 0-6 reverse at Rochdale & a 5-0 victory over York City with Bobby Ham hitting 4 of them. Searching for a winning combination, Wheeler was not afraid to blood the clubs youngsters with the likes of Harney, McNally & Montgomery all seeing league action. The masterstroke that changed the season came with the switch of Bruce Bannister out to the wing in place of Walker, the move of Striker Leighton (pictured) back to wing half & the signing of totem forward Norman Corner from Lincoln to lead the line with the likes of Middleton, Ham & Rackstraw feeding off the big man.

A win away at Notts County on January 11th 1969 saw the team embark on a record breaking 21 match unbeaten run taking them once again into the heart of the promotion battle. 3 games to go and a thrilling match at Valley Parade saw the side come back from 0-2 down against Southend to win 3-2 with winger John Hall getting the winner in front of 11000 fans. A defeat at Brentford in the penultimate game put the side in the dreaded 5th position again, surely not more heartbreak? The final game was the memorable trip to Darlington on 9th May where all points North had an armada of cars & coaches covered in Claret & Amber favours. Despite a wall collapsing due to over exuberance, a 3-1 victory saw the side capture the precious 4th promotion place. Jimmy Wheeler’s first season as a Manager had seen him achieve the clubs first promotion for over 40 long years.

Entering the new season in the 3rd Division, with an eye still on finances but also showing faith in the team that got promotion, only one signing was made in utility player Peter McConnell. The club carried the momentum into the new season and were challenging for the top positions before fading away to mid table towards the seasons end. The highlight of the league season being an 8-1 thrashing of Bournemouth at Valley Parade, a Bobby Ham hat-trick amongst the 5 different scorers.

The glory & excitement of the season was to come in the cup competitions. A run to the 4th round of the League Cup saw the highlight of a magnificent 2-1 away win at top division Sunderland. It was a settled side & Wheeler was a big believer in continuity, the only changes usually down to injury. Roberts shared keeper duties with Pat Liney & big Barry Swallow was a more than capable deputy for Hallett at centre half before his departure in the Summer.

The FA Cup brought further excitement when the 3rd Round draw saw City drawn at home to the might Tottenham Hotspur, a team full of stars like the legendary Jimmy Greaves, Alan Gilzean ,Cyril Knowles & the rest. The biggest crowd for many years, a crowd of over 23000 saw the team bravely draw 2-2 with the first division giants only a Cyril Knowles goal line clearance saving them from a memorable giant killing act. Sadly, the replay at White Hart Lane saw class tell as City lost 0-5 but the memories of the cup games that season stayed long in the memory. For myself, I can remember struggling to see the game on the packed Kop & I recall a Spurs fan lifting me onto his shoulders to watch the game. There wasn’t a hint of hooliganism & no segregation in the ground, just funny banter between fans. Even the replay defeat couldn’t deflate the excitement of a first visit to London & a first division stadium.

The season had been satisfactory with the early promise & the cup highlights. Once again, Wheeler wasn’t scared to blood youth with the young Graham Oates, England Youth Peter Turbitt & Bob Cullingford becoming the clubs youngest ever player, a record only recently broken by Reece Staunton. A notable late season signing had been influential midfielder Les O’Neill who soon became a fan favourite. Jimmy Wheeler had kept faith in players that had served him well and at this period City had several long serving players who would rightly become legends & household names in Bradford folklore. The likes of Bruce Stowell, John Hall, Bruce Bannister , Bobby Ham, Tommy Hallett and others are still fondly remembered to this day by Bantams followers.

Season 1970-71 was Jimmy’s 3rd in charge after another bright start became a war of attrition with a real danger of relegation before a final finish of 19th. No joy in the cups either to offer inspiration from somewhere. Jimmy had made a couple of ‘big’ signings to freshen up the ageing team with strikers Terry Owen, Father of future England star Michael & Colin Hall arriving after the sale of star striker Bobby Ham to Preston. Neither of the new men had the desired effect as City struggled and faded out of the picture. The only bright spots of the season were the establishment in the side of 2 youngsters, Graham Oates who would later be sold for very decent money in 1974 to Blackburn Rovers with Don Hutchins coming in the other direction & local product Ces Podd started what would be a career to outlast any other City player before or since. He would battle racism from opposing fans to establish himself as a much loved legend and a hugely respected player in the game. He always mentioned that the faith shown in him by manager Wheeler made him stronger and able to contend with all the problems he faced in his early career.

The season of struggle had ended with murmurings of discontent amongst sections of the crowd & despite starting the season with several new signings, the most notable of which was full back Graham Howell, the club faded dismally to finish bottom returning to Division 4 once again. Jimmy Wheeler wasn’t there to see it though. After an early season campaign led to a poor start, he resigned to be replaced by the popular Bryan Edwards.

Jimmy’s time at Valley Parade saw some wonderful success in both league and cup competition & I think he has been sadly underrated and almost forgotten by some fans. The promotion side was wonderful to watch with goals from all over the field. He displayed an honourable loyalty to players who performed for him & yet, as mentioned , he wasn’t afraid to blood youngsters. He was said to be a disciplinarian but Ces can remember him putting an arm round him & encouraging him when he was thinking of walking away from the game. He was approachable to the fans also, recently, long term fan Keith Bruce retold how his late father had spoken to Jimmy at a supporters forum about tactics as viewed from the stands and then he received an invite from Jimmy to join him in the dug out for a match to watch him closely at work. The story was featured in the T&A.

It would be another 5 years before City gained another promotion but Jimmy never managed another Football league club. It was said he had only been cautioned once in a 16 year playing career but a touchline clash with the officials at a cup tie at Lincoln saw him punished by the FA and ordered up to the stands for several games. The calm pragmatist showed he did have the passion which every knew he had but was rarely shown. He deserves to be remembered for his 3 year tenure, certainly he is by me as it was the beginning of my connection to the club enshrined by that wonderful promotion season of 1968-69. Thank you & Rest in Peace Jimmy.

VINCIT provides an accessible go-to reference about all aspects of Bradford sport history and is neither code nor club specific. We encourage you to explore the site through the menu above.

Future planned articles on VINCIT will feature the original development of Park Avenue in 1879-80; Bradford’s nineteenth century England RU internationals, the history of sports journalism in Bradford; the politics of Odsal Stadium; the history of Bradford sports grounds and the history of crowd violence in Bradford.

Contributions and feedback are welcome.