Between the two world wars, Bradford, although still a fairly prestigious city in the textile & mercantile sense, had lost some of the greatness that epitomised it as a leading player during its Victorian & Edwardian heydays. The Great War not only saw a lost generation of Men and a decimated workforce but a change in the world order of doing business in ways which affected Bradford trade. The diminishing German population of Bradford & their business savvy & acumen was sorely missed.

As the country started the long rebuild, new ideas were gaining ground in stronger rights for workers with unrest and revolution in the air in several countries, Votes at last for women, a partial collapse of the old class ridden society where everyone knew their place. People were questioning the old ideals.

As the workforce was more widely spread due to shortages, people found more time on their hands. The old Victorian music halls found themselves being overtaken by the new craze from the United States, namely talking pictures and newsreels which made the world seem a whole lot smaller. Old time dance halls saw a rise in popularity with jazz & big band offering the live entertainment.

In the 1930s Speedway would enter the arena along with a second greyhound track in the Brownroyd area of the City on Legrams Lane.

1926 though saw the entry of greyhounds to Bradford when the National Greyhound Racing Club took over the greenfield stadium at Dudley Hill. The arena was already well established in Bradford, in 1906 it consisted of an athletics track and had featured trotting meetings on its eliptical shaped track.

It had also seen local Soccer games before the newly formed Bradford Northern Rugby League club  rented the arena in 1907 from Whitaker’s Brewery for £8. The attached Greenfield Hotel became the club’s headquarters. Northern spent only the single season there the highlight beating the touring New Zealand side. Northern had spent £302 on improvements, a Grandstand, the pitch and perimeter fencing. The clubs first AGM in June 1908 saw them leave and move to Birch Lane which was regarded as nearer town and with better transport links. The Greenfield arena resorted back to its original use of athletics meets and trotting derbyies.

The year 1926 saw the arena become one of the first in the UK to become a greyhound track. By now more developed with much more covered accommodation for spectators, the development saw a large Tote board erected at one end and a clubhouse built with betting facilities enclosed. Race day kennels and a paddock were built behind the main stand and residential kennels also provided for local animals. 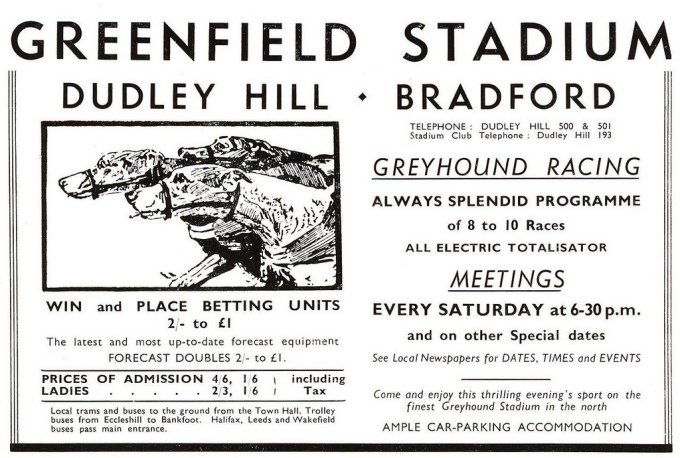 The arena had a successful start but suffered a blow when on the night of 29th October 1927, severe gale force winds ripped the roofs off both stands and the betting enclosure. Two major investors oversaw repairs to what was seen as a prestigious track in the north, the Greyhound Racing Association & the Electric Hare Company of Liverpool. The circuit had a 420 yard circumference which catered for both flat races and hare races at a variety of distances from 300 to 700 yards in length. The shape of the track featured a long run to the finish which heightened the excitement for punters. A third stand was eventually built on the third bend bringing the capacity to 7,000.

Race highlights feature famous trainer Jimmy Rimmer of Waterloo Cup fame set a track record 504 winners in  one season in 1932. Rimmer went on to become a trainer at the top London tracks in future years .

In 1934, a Greenfield trained dog named ‘Deemsters Mike’ represented the track in the National Greyhound Derby Final and also won the Northern title in the Flat race.

The year 1931 saw the National Cup ran over 500 yards held at Greenfield, a big honour for the track which was won by a dog named Doumergue in 29.34 seconds. The club was run by members with an annual subscription of 1 guinea.

During the 1930s, Britain saw a short-lived craze to establish baseball in the country and Greenfield had a team but the craze didn’t last.

Post war, as attendances started to dwindle, other avenues were explored and after the demise of the Tudors/Boomerangs Speedway team at Odsal, the reconstituted team named the Panthers arrived in 1961 to race on the newly laid speedway track which was laid inside the dog track. The experiment, despite the expertise of speedway legend Johnnie Hoskins, only lasted a year and ended with a double header meet with Sheffield and Leicester in October, 1962.

The attendances at the dog racing continued to dwindle until after pull outs by investors saw the old arena finally close for business in March 1969. A sad end to an exciting piece of Bradford Sporting History. Sadly, no trace remains of such a fine arena, the stadiums footprint being totally covered by industrial buildings and warehousing.

The final meeting was on March 5th 1969 with an attendance of 4790. Many more than had regularly attended and was probably boosted by sentimentality for the old place and a final goodbye to many memories.

With the success of greyhound racing in the 1930s, across the city in the Brownroyd area saw the building of a second track just off the Legrams lane tram route. Surrounded on all sides by industrial buildings and a freight carrying railway line, it was known as the City Stadium officially opened on Monday 15th August 1932 five years after the opening of Greenfield. It also featured a Tote board and seating with kennelling on the Legrams Lane side. 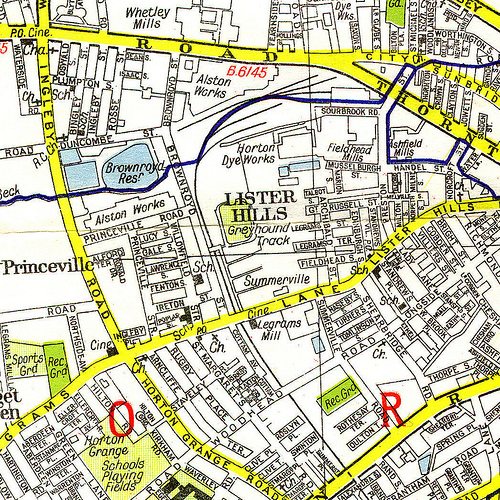 Officially and originally affiliated to the rival British Greyhound Track Control Society, when this body disbanded in 1935 the stadium owners became independent and unaffiliated. Compared to Greenfield the facilities were very basic and probably the tracks biggest claim to fame was the fact it featured in several scenes in the famous & successful 1958 film ‘Room at the Top’. As regards the racing it specialised in handicap races over its 470 yard distance. As with other tracks, efforts were made to find other sources of income as crowds struggled. A velodrome was created around the track for cycle racing, karting races were held as seen in the fantastic images provided by Graeme Wright. Also tried out was baseball with the ‘City Sox’ using the arena (photo below) but as with Greenfield, the craze never really established itself and soon folded. Dog meetings were held on Wednesday & Saturday afternoons and clearly had plenty of competition of many sports in Bradford to compete with.

The Betting & Gaming Act of 1960 allowed the opening of high street betting shops and this affected the Tote turnover and attendances. 1963 also saw a serious fire caused over £50,000 damage from which the track never recovered. The last Greyhound meeting was held on Wednesday afternoon of 30th October 1965. Cycling events continued for a while but with the track being a hard surface with tight bends it wasn’t conducive to fast sprinting. 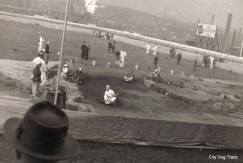 The track was originally built on the site of an old mine on scrubland with a dye works belching out noxious fumes on one side and the railway wrapping itself around the track. Nothing now remains of the track , now also under industrial units although a tip of the hat to its old use is there with a road named ‘Greyhound Drive’ leading to the industrial units.

Bradford invested largely in the greyhound craze which really had its peak in the 1930s and the two tracks were decently supported for a while despite all the other distractions in the City but sadly, eventually fell foul of dwindling support.  Attempts to diversify to maintain the arenas sadly also failed. Even in the strongholds in London, the sport is a shadow of its former self. These days the nearest tracks are at Kinsley near Pontefract and at Owlerton in Sheffield.

Ten miles up the Aire Valley in Keighley, the buzz of the 30s craze of Greyhound Racing that had led Keighlians to travel to Bradford for their fix was finally catered for when they got their own track.

!947 saw the conversion of the old Keighley Town stadium known as Parkwood, although technically it was in the Aireworth district for Greyhound Racing. Originally called Parkwood AFC, a name change to Keighley Town saw the team rise to a top quality amateur status without ever worrying the highest standards of the game. For a proper history please reference the book on Keighley football by Rob Grillo, highly recommended. Town folded for the first time in 1948 but their ground was placed between the River Worth & Beeches Road approximately behind the present Aireworth Vets Practice & the Harrison & Clough factory. 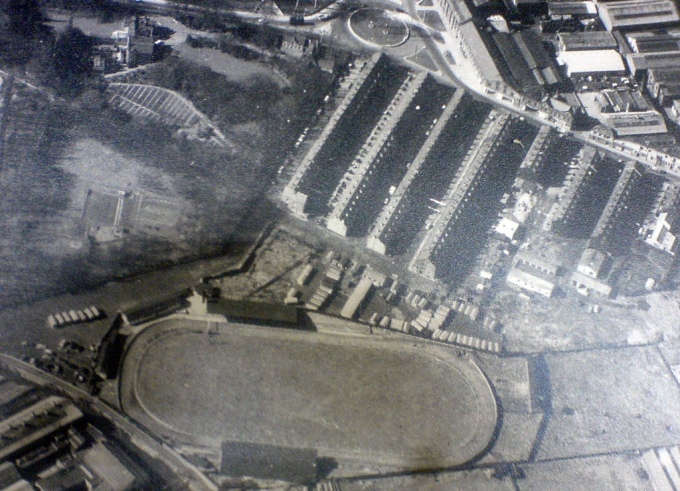 The track opened for racing on 22nd November 1947 and operated as an independent track outside the affiliation of the NGRC. Such tracks were known as ‘flapping’ tracks. The racing took place on Tuesday evenings & Saturday evenings at 7.30pm. My own family legend has it that local men would visit the track after an afternoon watching Rugby League at Lawkholme Lane and return home via several public houses worse for wear and skint after a full day out watching sport & drinking much to the ire of their wives.

The track was 410 yards in length and major race distances were over 306 & 518 yards. There was a mechanised ‘Hare’ system & photo finish apparatus. Very much ahead of its time for the immediate post war era. A licensed bar, snack area and car parking made it all the more attractive for the punters. I remember going in the 1960s with my Uncle & cousin who lived in Keighley and can remember the buzz of a very decent crowd as the dogs burst out of the traps. It was one of my first exposures to sport. The kennels for the resident dogs were housed over in Steeton .

As mentioned, crowds were always pretty healthy with the track well within walking distance of the town centre & also the rugby ground. 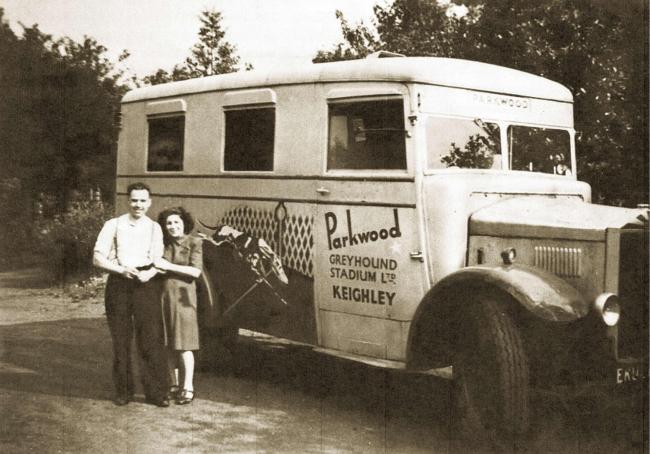 1965  saw a dog named ‘Rusty’ break the track record in a time of 29.05 seconds but there was a mystery and potential scandal around the achievement as it was alleged that ‘Rusty’ was in fact a dog named ‘Hi Joe’ which had been stolen from the NGRC licensed kennels of Noreen Collinand had in fact won a prestigious Juvenile race and was one of the favourites for the 1965 Greyhound Derby. The mystery was never solved as the dog once again vanished after its triumph at Parkwood.

As with the rest of the industry, as the 1970s approached the crowds dwindled and the march of progress saw the track finally close on Christmas Eve 1974 due to proposals for the route of the new Aire Valley road which today cuts across the footprint of the old site. It was the end after almost 30 years of racing in the town. The road was finally opened (A650) in 1988 and covers twhat was the southern part of the stadium. Nothing remains now but a football ground covers what was the Northern end of the stadium.

Ian has contributed articles to VINCIT about a broad range of sports and links can be found from the drop down menu above.

Future planned articles on VINCIT include: